If she wins the Oklahoma GOP election for chairperson Sunday, naturalized El Salvadorian immigrant Estela Hernandez could become a powerful figure in the national Republican Party.

But while some high-ranking Republicans have told NonDoc the party’s acting chairwoman is “going to win,” others have said the field of 250 to 300 ultra-conservative party delegates is too unpredictable for such speculation in a three-way race with Pam Pollard and Robert Hubbard.

“No one knows shit,” said one Republican who has served in the Legislature.

If Hernandez does win, her political profile appears ripe for National GOP picking as a less goobery and less ditzy combination of Sen. Marco Rubio and former Gov. Sarah Palin, respectively. While Hernandez would lack the experience of actually holding public office, she has worked in real estate and operated a construction company with her husband, and she has already been named a “Rising Star” by the Republican National Committee.

But what Hernandez looks like and where she came from are central to her story, just like any political figure. For the woman who immigrated to this country legally with her parents at age 6, who worked to become a citizen and who attends other citizenship ceremonies to promote American values and the Grand Old Party, her skin color and surname are undeniably relevant, even if she doesn’t want them to be.

Just this week, Republican party state committee members — who will vote Sunday — received an anonymous mailer slamming Hernandez for supposedly supporting a 2013 bill in the U.S. Senate to reform immigration in America. The mailer featured no source for its creation, nor any citation for the claim about S. 744.

“I think that individuals who oppose me can’t fathom the idea that an immigrant can be as American as they are and can love this country as much as they do,” said Hernandez, who assumed the acting-chairwoman title after the resignation of controversial chairman Randy Brogdon. “They want to use that trip I took to Washington in 2013 against me.”

That trip, she said, included multiple high-ranking Oklahoma Republicans, as well as one of her opponents for the GOP leadership position, Pollard. Hernandez called out “hypocrisy.”

While the mailer may be anonymous, evidence exists online showing it may well be accurate in a classic political-parsing-of-words way. Hernandez said in a May 2013 letter to the editor of The Okie:

“At a time when so little gets done in Washington, I hope passing this legislation remains a priority for Oklahoma’s Representatives in Washington. We haven’t seen a genuine opportunity like this in decades, and we have to seize this chance to make a lasting impact for the good of all our citizens.”

While Hernandez did not use the word “amnesty” or address specific components of S. 744 as proposed, the mailer against her simply states she “went on record in support” of the bill. The mailer does feature a typo, using the wrong verb form of “provide.” In that sense, it pairs well with Hernandez’s statement Wednesday issued to the McCarville Report, which included the phrase (sic): “Let me clear. I do not support amnesty.”

The need for proofreading aside, Hernandez, Pollard and Hubbard all agreed on the need for OKGOP members to work together. Each issued statements condemning the attack mailer that were picked up Wednesday by the McCarville Report.

“I have never heard her speak in favor of amnesty or any statements contrary to the platform of the OKGOP,” Pollard said in her statement. “My mother was also a legal immigrant from Ireland when she was only 16 years old so the issue of immigration is very close to my heart as well. I will join with Estela in opposition to amnesty and illegal immigration.”

Said Hubbard: “I am extremely saddened by this and condemn it. Estella (sic), Pam and I were together again last night in Ardmore. The three of us have a great working relationship and respect for each other.”

Hernandez said she has warned Republican candidates in the upcoming Senate District 34 special election that attacking each other is bad for the party.

“If we continue to work this way, we are not going to have a very successful 2016 election cycle,” she said.

The GOP meeting and election is set for Sunday from 2:30 to 5 p.m. at Oklahoma City Community College. 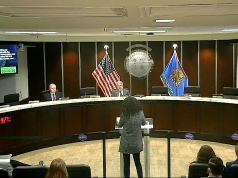