Related to their operation of Rest Haven Management, Inc., the Myers sisters face four felony counts of financial neglect by caretaker as well as four other felonies, including conspiracy, identification theft, crimes assisted by the use of computers and engaging in criminal patterns across multiple counties.

Filed today, the charging documents (embedded below) allege the Myers sisters conspired to financially neglect the care of a witness identified by the initials D.B. “A vulnerable adult,” D.B. had more than $32,000 of unapproved charges made to his personal bank account.

“The implicit or explicit agreement was carried out by Lavada Stacy Myers obtaining the Wells Fargo debit card (…) belonging to D.B. under the pretense of using the debit card to pay for D.B.’s monthly living expenses at Four See Care Home,” Assistant Attorney General James Hughes, Jr. wrote. “Without the knowledge, permission or consent of D.B., (…) the fraudulently obtained debit card and/or the information on the debit card was used repeatedly by Lavada Stacy Myers and/or Enetrice Renne Myers-Tarpeh to make personal purchases, obtain goods, services, money or transfer funds.”

D.B.’s debit card was used from Ohio to make 25 separate and distinct internet transactions from Mary Kay, Inc., valued at $10,459.46, Hughes wrote. He wrote that another 25 transactions totaling $5,228.31 were made through MoneyGram International, Inc., as well as seven transactions with airlines and numerous transactions with retail locations and utility service providers in east-central Oklahoma.

“This is an ongoing investigation,” said Alex Gerszewski, communications director for Hunter. “We were made aware of certain aspects of the allegations earlier this year.”

Reached Wednesday by phone to discuss cease and desist orders issued on their two “unlicensed” and one licensed residential care homes, Stacy Myers deferred comment to her sister. Enetrice Myers hung up the phone in the middle of an interview, but she called the situation unfair and mischaracterized.

“I guess I don’t understand what all has happened today. I wasn’t aware that this was happening,” Enetrice Myers said. “A lot of families call me before they have a loved one who needs a place for long-term or they can’t live at home or they can’t be at no hospital no more.”

The alleged victim D.B. was a “private pay” resident of the Four See Residential Care Home who maintains his own bank account, according to court documents. In all, 20 people were living at the three Boley homes operated by the Myers sisters.

Charges: Financial neglect of man with ‘capacity of an 8-year-old’

In his probable cause affidavit seeking an arrest warrant for Stacy Myers, Mike Hanson, an agent in the state’s Medicaid Fraud Control Unit, wrote that the Okfuskee County District Attorney’s Office referred an allegation of financial exploitation at the Four See Residential Care Home. Hanson worked with Tracy Baker, an investigator for the Okfuskee County Adult Protective Services office.

“It was reported in the complaint that D.B. came into a large sum of money by way of an inheritance which may have paid for these items,” Hanson wrote.

“Investigator Baker stated that D.B. is an adult man with the mental understanding and capacity of an 8-year-old,” Hanson wrote. “This fact also contributed to the unlikeliness that D.B. had completed these transactions.”

Hanson wrote that he interviewed Stacy Myers on June 14 in the presence of her legal counsel and showed her four purchases made in Midwest City, Shawnee and Seminole.

“During the interview, Myers admitted to having made the purchases listed above,” Hanson wrote. “Myers said that the transactions through City Gear and Hibbett Sports were for D.B.’s new shoes. However, your affiant was able to confirm that the purchased shoes were a size 11.5. D.B. wears a 14 (or) 14.5 size shoe. Upon further questioning, Myers admitted that the shoes went to another unknown male.”

In his probable cause affidavit seeking an arrest warrant for Enetrice Myers, Hanson wrote that he learned she is a full-time resident of Stow, Ohio who “would travel periodically to Oklahoma to conduct business.”

“Upon reviewing D.B.’s finances in greater detail, it was determined that numerous purchases utilizing D.B.’s account, were made from Ohio,” he wrote. “In total, D.B.’s card/account was used in $32,846.84 worth of transactions related to items and/or services that were not authorized by D.B.”

Hanson wrote that he spoke with Enetrice Myers-Tarpeh by phone on Aug. 5.

“During the course of the investigation, it was determined that D.B. was consistently current on the expenses for his board and care and in some cases paid in excess of the amount owed.”

‘A pattern of criminal activity’

Dave Sousa, a 30-year Air Force veteran whose son was living at one of the homes operated by the Myers sisters, said Thursday evening that the court filings show “a pattern of criminal activity.”

“Unfortunately these specific charges (Feb 2018 – May 2019) do not cover the time period that Erik resided at a Rest Haven property,” Sousa said. “However, I strongly believe this is a pattern of criminal activity, neglect, abuse, and downright inhumane treatment of the most vulnerable in our society. I hope there are future charges filed so that the perpetrators involved are held  accountable to the fullest extent of the law, for the human tragedy, cost, and suffering of those displaced.” 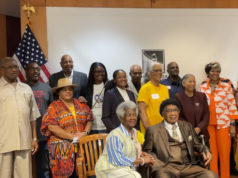 What’s in a nickname? Election Board strikes ‘The Patriot’ from Sean Roberts’ candidacy