Absentee voting is underway for the Sept. 18 Muscogee Nation primary election, which will help determine much of the makeup of the Muscogee National Council, and there is no shortage of candidates seeking the Tulsa District B seat.

Issues raised by candidates have included tribal sovereignty, the way the National Council conducts its business and health care services and accessibility.

A primary election will be held Sept. 18., with absentee voting underway and early voting set for Sept. 15 and 16. A general election, scheduled for Nov. 6, will be held for the council seat if no candidate wins more than 50 percent of the vote in the primary.

The Tulsa District includes most of Tulsa County and the cities of Tulsa, Jenks and Glenpool, among others.

Below is a look at the candidates seeking the Tulsa District B seat. The following information was gathered from publicly available sources, and candidates are presented in alphabetical order, with recorded candidate interviews conducted by Mvskoke Media embedded when available as well. Profession: A Glenpool resident, Beaver is citizen enrollment specialist for the Muscogee Nation.

Experience: This is Beaver’s first run for elected office. He has served as a volunteer in several other tribal organizations as well as Jenks Public Schools. He graduated from Rogers State University where he obtained a corporate communications and a masters degree in indigenous people’s law from the University of Oklahoma.

Platform: In a recent interview with Mvskoke Media, Beaver said he decided to run because he sees the needs out there from citizens both on the cultural side and on the tribal government side. Beaver said he will bring youth and new ideas to the Council if elected including expansion of youth services and elder care. Profession: Gouge is a retired 28-year Army veteran with multiple foreign deployments and a longtime social worker for the Cherokee Nation.

Platform: Gouge believes the nation’s children must be served for it to have a future. That includes expanded education, cultural and athletic opportunities.

In a recent interview with Mvskoke Media, Gouge said his experience in a range of areas gives him unique insight. He also emphasized that tribal money received from the federal government in the wake of the coronavirus pandemic should be carefully managed. If elected, Gouge said he would work to update tribal codes. Profession: Hawkins is a former chief of police for the Muscogee Nation Lighthorse Police Department.

Experience: Hawkins has worked in law enforcement for a decade. This is his first run for the National Council.

Platform: If elected, Hawkins has said he would work to keep the tribe moving forward, something he says is important so that its citizens can prosper. He also wants to make sure he would be a voice on the Council for the people and would be accountable to them.

Above all, Hawkins has said voices need to be heard. He also believes tribal members can do a better job of working through disputes and problem solving rather than letting those differences hold the tribe back.

Profession: Killingsworth has 27 years of experience in the oil and gas industry, working with both privately owned and publicly traded companies.

Experience: Killingsworth’s campaign appears to have no social media or online presence.

Platform: In an interview with Mvskoke Media posted Wednesday evening on YouTube, Killingsworth said he is “a business guy” whose Christian faith drives his life. A father of two, he said he is “looking for some opportunities to serve” and that “the tribe is one of those areas I’d like to serve in.” Killingsworth said he was motivated to run because “when I looked at all of the councilmembers across the board, I believed I could be an asset and help take the tribe to the next level.” Profession: Tiger is the current Tulsa Seat B incumbent who previously served as speaker of the Muscogee National Council from 2016 through 2019.

Experience: Tiger, who is completing his second term on the Council, has been active in tribal government in various capacities. Most recently, he ran for principal chief in 2019. He finished third in that race and disputed the results.

Platform: Tiger has championed the tribe owning as much land as possible because he believes it not only facilitates economic development, but he has said it also helps ensure tribal sovereignty and culture in the long term. He also believes the tribe needs to continue to invest in businesses that are profitable in order to maintain revenues.

Lucian Tiger III is of no relation to former Muscogee Nation Principal Chief George Tiger, who was sentenced to a federal prison sentence. In 2015, Lucian Tiger III sponsored a Council resolution stating representatives had “no confidence” in then-Chief Tiger.

In late 2017, Tiger was accused by fellow Rep. Dode Barnett of slapping her on the butt before a 2015 Council meeting. The matter was the subject of some discussion, but no action came from it. Profession: Thompson is a retired welder.

Experience: This is Thompson’s first run for the National Council.

Platform: Thompson said she is running because of a lack of representation for regular citizens on the Council. If elected, Thompson has vowed to fight for the rights of all citizens with transparency, honesty and compassion.

Thompson also said that, if elected, representing citizens would be her only job. She has pledged to work to improve car tag access, exempt some citizens from taxes and create legislation to preserve tribal culture. Profession: Watson is an artist and a tribal PBX operator.

Experience: Watson has worked for nonprofits and also as an artist. He has advocated publicly for the changing of school mascots based on Indigenous stereotypes, including that of Tulsa Union High School.

Platform: In a recent interview with Mvskoke Media, Watson said he will be a team player if elected. He also said he would promote health initiatives, such as mobile dialysis for those in need, which he says is a common sense solution to an existing problem. He also pledged to promote wellness and culture that he believes is necessary for the nation to prosper. 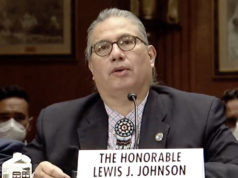