Despite opposition from some Tea Party members, the sales tax proposed for financing emergency renovations to Grady Memorial Hospital passed with more than 80 percent of the vote Tuesday.

Grady Memorial CEO Warren Spellman told NonDoc in late January that he had “no choice” but to put a funding initiative before the people of Chickasha, Rush Springs and surrounding Grady County communities.

“We need community support, and I think we’re going to get it,” Spellman said at the time. “Without the surgery center, we’re wounded. We’re crippled.” “Grady Memorial CEO on proposed tax: ‘I have no choice’” by William W. Savage III

Grady Memorial’s surgery center was closed after state safety surveyors — working on behalf of the federal Centers for Medicare & Medicaid Services — issued several “immediate jeopardy” declarations for the hospital. While the lingo and jargon associated with the violations is complex, the long and short of the assessments meant Spellman had to close the surgery center.

“We can’t do c-sections, so that means all of our obstetrics went away,” Spellman said. “We were the only hospital in a very large area that did OB. Lindsay and Anadarko don’t, so that’s a big deal.”

While Spellman spoke to community groups about the need for sales tax funding to finance construction that would reopen — and modernize — parts of the hospital, some people opposed the project.

Kily Keeling, a Chickasha resident with ties to the Grady County Tea Party, wrote a letter to the editors of NonDoc criticizing the sales tax proposal:

Hospitals can say they are about helping people and saving lives, and I’ll believe them. However, a county-wide election is all about politics, and politics is all about money. This tax picks out blocks of voters they think are required to win and offers them money — lots of money.

Grady Memorial Hospital now has a target on their back. Without new leadership, management and a true game changer, this is simply a waste of the working class’ money.

The tax will begin July 1, according to a report in the Chickasha Express-Star. 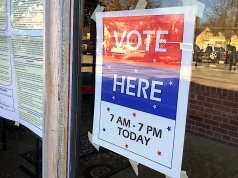 Letter: Even Festus can see water problems in Chickasha