Approximately 90 minutes after Timothy McVeigh bombed the Alfred P. Murrah Federal Building on April 19, 1995, killing 168 people, Oklahoma State Trooper Charlie Hanger pulled him over on I-35 for driving without a license plate. When McVeigh reached for his driver’s license, Hanger spotted a Glock handgun under his jacket and arrested him for carrying an illegal concealed weapon.

McVeigh was sent to the Noble County Jail, in nearby Perry, Oklahoma. Two days later, the FBI had identified McVeigh as a suspect. The authorities placed a hold on him just minutes before a bail hearing in which he would likely have been released.

McVeigh and his accomplice, Terry Nichols, had planned their attack meticulously. Every movement and technical detail had been accounted for. The missing license plate on the getaway car seemed like an uncharacteristic oversight and became a lingering mystery about McVeigh’s actions that day.

The following is an excerpt from McVeigh: The Inside Story of the Oklahoma City Bombing. It has been lightly edited for continuity.

Timothy McVeigh said he staged his 1977 Mercury Marquis in an old alley a few days before the bombing. At the time, the location was in a dilapidated area of downtown Oklahoma City (now becoming gentrified) just on the other side of the railroad tracks, a few blocks north of Deep Deuce.

Deep Deuce is a historic part of town that once bustled with black nightclubs. The area was extolled by the famed Oklahoma City writer Ralph Ellison, author of Invisible Man, the classic novel about black life in segregated America. In Ellison’s personal account of Deep Deuce, he wrote about the richness of the area:

Heard thus, across the dark blocks lined with locust trees, through the night throbbing with the natural aural imagery of the blues, with highballing trains, departing bells, lonesome guitar chords simmering up from a shack in the alley, it was easy to imagine the voice as setting the pattern to which the instruments of the Blue Devils Orchestra and all the random sounds of night arose, affirming, as it were, some ideal native to the time and to the land.

When we were still too young to attend night dances, but yet old enough to gather beneath the corner street lamp on summer evenings, anyone might halt the conversation to exclaim, “Listen, they’re raising hell down at Slaughter’s Hall,” and we’d turn our heads westward to hear Jimmy’s voice soar up the hill and down, as pure and as miraculously unhindered by distance and earthbound things as is the body in youthful dreams of flying.

McVeigh’s dreams, of course, were filled with violence. It’s unlikely he ever read Ellison’s works. In McVeigh’s Turner Diaries vision, black people did not fly. They hanged from trees.

And yet, in the streets of Ellison’s Deep Deuce, McVeigh sowed the seeds of his own demise. By his account, he backed the car into the alley, which ended at a brick wall of a dilapidated warehouse. He got out and removed the license plate. Then he met up with Nichols and the two drove to Kansas, where they were living, and took the plate with them.

When McVeigh was stopped, 90 minutes after the bombing, it was because of that missing license plate. So why did he remove it? 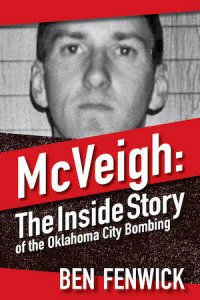 “There was a somewhat conscious effort in my mind that I was pretty much going to be caught anyway. The second [thought] was I did not want to leave my plate on the car in case in the three days it sat there a police officer ran the plate to find the abandoned car’s owner,” McVeigh later told his attorneys. “So, therefore, I took the plate off and backed it to within about two inches of this brick wall.”

After he turned the car off and got out, he slipped a paper towel over his gas tank in the back. He reasoned that he would immediately be able to tell if someone had tampered with his car. He often suspected he might be watched by agents of one kind or another. Then he put a note on the dash, scrawled on a piece of cardboard: “NOT ABANDONED. Please do not tow. Will be removed by April 23rd. (Needs battery and cable).”

“I put this note over the VIN number on the dash so that no police officer could run the VIN number either, unless he broke into the car,” McVeigh said.

In itself, removing the plate and covering the VIN at that time was smart enough. He wouldn’t be remembered by any cameras or bystanders. Should someone see him pull away from downtown Oklahoma City after he had wreaked destruction upon its people, neither they nor any stray cameras — which weren’t nearly as ubiquitous in the mid-1990s as they are today — would catch the number on the plate. Having no plate would help him to get away clean. But driving on the interstate without it would have the opposite effect.

McVeigh and Nichols had a stolen plate that could have been used in the getaway, but McVeigh didn’t want to use it.

“I convinced Terry, I said, ‘Well, that will be one extra thing I have to fumble with,’ when in reality it could have been easy to plan to keep that plate there,” he said in a deposition. “I could have had it under the seat of the car and flip it up in the back window, or I could have carried it and also just flipped it up in the back window, not necessarily put it on. But at that point I was trying to convince Terry that I was going to try to get away when I knew in my mind that I wasn’t really going to try.”

McVeigh thought bombing the Murrah building would be a grand revolutionary act, but after it was done he didn’t have any idea how to carry on his revolution.

“There is a little bit of giving up involved there,” he said in the deposition. “There is a little bit of I had nowhere to go, no allies to continue anything with. (…) One thing that never came to me was a purpose after this, beside a solo war, which I did not have the resources for. (…) If I step back and look at the entire incident, I believe with 99 percent surety that I could have gotten away clean from this and continued on if I had anywhere to go.”

(Editor’s note: To read more of Fenwick’s new book, order it online or from local bookstores.)