This is the first week of the month of Ramadan, during which Muslims fast from sunrise to sunset and strive to shed bad habits. It is a time of celebration, but it is also a time of spiritual reflection.

Because of the pandemic, we are unable to gather in mosques or at each other’s homes to break fast with a meal known as iftar, as we usually would. In a normal year, my mosque in Norman would have invited non-Muslims to open fast with us and share a meal. This would have been a meaningful opportunity to demystify Islam and promote love and understanding.

In Oklahoma, we have made considerable strides in terms of inclusivity for Muslims. In 2017, an imam was prohibited from offering an invocation in the Oklahoma House. On March 26 of this year, however, that same imam was able to deliver the prayer in the State Senate. A year ago, there had never been a Muslim serving in the state Legislature. But in February, Rep. Mauree Turner (D-OKC) made history by becoming not only Oklahoma’s first Muslim legislator but the first nonbinary lawmaker in the country.

It often feels as though the history of Islamophobia in our state is being mended, so, on Saturday, I was shocked to learn that the Oklahoma Republican Party had elected former Rep. John Bennett as the state party chairman, despite his history of hateful speech about Muslims. It is a disappointing decision and one that could risk halting and undoing the progress of Oklahoma Muslims.

John Bennett’s Islamophobic rhetoric and behavior are notorious. He called the Muslim civil rights organization CAIR (where I previously worked as an intern) a terrorist group. He conducted an interim legislative study to investigate the threat of “radical Islam,” and he looked an imam in the eye and reportedly told him that he was going to demolish his mosque. Perhaps most egregiously, in 2017, his assistant handed two high school students a questionnaire that asked, “Do you beat your wife?” along with other questions based on dangerous misconceptions about Muslims. In his eight years as a state representative, John Bennett sent a clear message to Muslims in Oklahoma: Not only were we not welcome, but we were a threat.

This kind of Islamophobic rhetoric takes an undeniable human toll on Muslim communities. As a kid, I remember an older couple suspiciously following my hijab-wearing mother in TJ Maxx. While I was in middle school, one of the two other Muslim boys in my entire class was called a terrorist at recess. In 2019, a Muslim woman was not allowed into the Tulsa County sheriff building unless she removed her hijab, and in 2016 a gun range in Oktaha posted a sign saying it was a “Muslim-free” establishment. These events aren’t just isolated incidents; they are the consequence of anti-Muslim rhetoric that has been spewed for years.

Islamophobic rhetoric has also inspired discriminatory policies and even violence. For the past four years, a ban on immigrants from Muslim-majority countries separated countless families. Politicians and pundits on news programs have floated ideas about the surveillance of mosques. There has been an unsettling rise in domestic terrorism, including violence against Muslims and the destruction of mosques. All of this occurs when misinformation disseminates in online forums, through the media, and even at the dinner table.

Responding in the spirit of Ramadan

Yet, Muslims across this nation and state continue to build bridges. Mosques host open houses for the general public and invite elected officials to iftars and the Friday prayer. We often have to work harder to prove that our faith is based on peace than other religions do.

John Bennet first grabbed national attention in 2014, when he called Islam a “cancer that needs to cut out.” He has doubled down on his misguided belief that Islam is incompatible with American values and is even a threat to the nation.

What I hope he someday understands is that being Muslim and practicing Islam is not a contradiction of American values, but rather an actualization of them.

I urge those in his party to hold him accountable and, in the spirit of Ramadan, I hope and pray that he changes his perspective. And when we are able to, I look forward to meeting my fellow Oklahomans, from all backgrounds, in mosques across this state to break fast once again. ‘It’s the big elephant in the room — no pun intended’: Freshmen Democrats prepare to serve in super minority 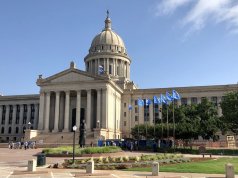