For many people, the mere thought of getting your hair cut provokes either delight or terror — or possibly both. The haircut we choose tells the world a lot about who we are. Haircuts are often extensions of our personalities. Whether we realize it, our haircut is a facade that conveys how we want to be perceived. Whether you want to be seen as a business professional, a trendsetter or even a Motörhead fan, your haircut is a primary factor in how you are judged.

With that said, today is Oklahoma’s primary-campaign Election Day. You’ve likely seen hundreds of ads and read countless articles or social media posts about the candidates. In the meantime, you probably took note of their haircuts in a subconscious way. As a barber, I have certainly paid attention.

So, to drop a little levity on today’s gubernatorial primaries, let’s take a look at what each gubernatorial candidate’s haircut can tell us about who he or she might be. Grade: D
What works: The concept of a shorter top with short sides is a great idea.
Room for improvement: Like his faux hawk, I can’t tell if his campaign is faux or real. Also, the faux hawk peaked, maybe, in 2003? The faux hawk used to communicate that, “Hey, I’m a little edgy, but I’m probably a mid-level manager at AT&T.” Today, this hairstyle still says, “Hey, I’m a little edgy and, 15 years later, I’m still a mid-level manager at AT&T.

(Side note: Chris’ Facebook was allegedly hacked, and comments were made that he supports euthanasia and assisted suicide. Though he claims it wasn’t him, there is a lot of controversy surrounding these comments. Some believe it actually was him, others believe he was hacked. Whoever it was, maybe that’s the edginess his hair is trying to communicate?)

In the end, the faux hawk seems dated. Just push it over to the side. Grade: C
What works: Something a little longer works great with curly hair. It has movement, texture and an overall softness to it.
Room for improvement: The top is a little lacking. Bringing up the sides and back will give an overall more balanced look (though the mullet might be the most iconic haircut ever). Currently, Fisher teeters dangerously close to a permed mullet, which would be offensive to even to the hippest of hipsters. I can neither confirm nor deny if he does perm his hair. If he does, then he should have aborted that idea back in the ’80s. Grade: D
What works: The mustache.
Room for improvement: With a little lacking up above, the longer sides really emphasize the exposed top. Bringing in the sides and back would give him a less frazzled look and bring out a more gubernatorial-looking candidate. Grade: A
What works: The overall length on the sides. Despite Jones having held the office of state auditor since 2010, he defiantly retains some self-awareness. With not much going on up top, the short, neat sides and back create the best options for him.
Room for improvement: None Grade: B
What works: Length on the sides.
Room for improvement: I feel his top is a little short. With his hairline creeping back, something just a little longer would draw your attention elsewhere. The wet or gelled look seems to expose the scalp more. A matte product might be a better option. Grade: C
What works: The idea of pushing his hair back is a classic men’s look that will probably never go out of style.
Room for improvement: The length around the ears makes his overall haircut look quite baggy — almost “Trumpian” in nature. Because of Richardson’s praise for Trump, this is no surprise. Cutting the sides just a little shorter would slim down some facial features, creating a more professional, timeless look. Grade: B
What works: I don’t know.
Room for improvement: There isn’t a lot of mystery in politics these days. That’s why I can support anyone who takes his gubernatorial campaign picture with a hat on. We have no idea what is going on under that hat. Maybe an undercut? Dreadlocks? Blake seems like a no-nonsense kinda guy, which is exactly what wearing a cowboy hat in your photo communicates.

Grade: D
What works: Pushing it up and back.
Room for improvement: We get it: You’re a fiscal conservative. Even still, spend a couple bucks on getting a haircut that doesn’t look like it was done “in the dark”. Notice in the commercial how heavy it looks just below his parietal ridge on the the side he parts his hair. This is a red flag for bad haircut. He might save us a couple bucks, but at what cost? Grade: A
What works: Overall, Mick has a great haircut. Not too short, not too long
Room for improvement: N/A
Style notes: Mick “Corn Nuts” Cornett’s even-keel approach to city and statewide politics directly reflects his moderate yet classic haircut. If elected, he probably won’t take any huge risks, cut funding to the bone or pile on a bunch of new taxes (but he will probably lead with both hands at 10 and 2). Grade: B
What works: The side part is great.
What needs work: Maybe a little shorter underneath will give it a less bulky look. Also, his hair could get a little “helmet”-looking with no part. (Actually, if he wins, he might need a helmet to combat all the Republican blows he will be taking.) Grade: A
What works: Connie’s style is a timeless look. Though we saw this hairstyle at the height of the ’90s texture explosion, it looks just as current today as it did two decades ago.
What needs work: N/A Grade: D
What works: Not a lot
Room for improvement: Like most Libertarians, Rex Lawhorn sees the world through rose-colored glasses, but I digress. Taking everything down really short would probably be the best option. Take inspiration from Gary Jones. Grade: A+
What works: All of it. It has texture, it has length, it has a flair that is truly unique. Joe’s platform is as diverse as whats going on up top. What’s going on up there could, in total, reflect all of us as Oklahomans.
Room for improvement: N/A Grade: B
What works: Though he is not just another fiery Libertarian, the side part and pushed back look is a classic men’s style that seems to work here.
Room for improvement: A little matte product would give it a less feathery look. ‘Do the math’: Bethany budget problem sucks up city savings 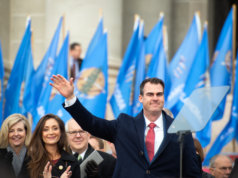