(Author’s note: This is the third in a three-part series detailing the influences that have shaped my changing perspective on the issue of immigration.)

In my previous two commentaries, I explained how both the Declaration of Independence and the New Testament have influenced my thinking about immigration. In this final installment, I will examine how my study of economics has also contributed to my “migration on immigration.” Specifically, this piece will examine the impact of immigration on employment, crime and government services.

Do immigrants really ‘take our jobs’?

One of the most common refrains against immigration (from those on the left and the right) is that new immigrants “take American jobs.” This sentiment is one of the first to be expressed whenever the issue of immigration is discussed, but is it true? Do immigrants, whether legal or not, take jobs that native-born Americans would have if given the opportunity?

Not really. This is a classic misunderstanding of how a market economy directs labor resources. First, there is no fixed number of jobs. Jobs are created and eliminated daily in this country. On net, more jobs are created than eliminated in non-recession years. Importantly, these jobs vary in the knowledge, education and skills necessary to perform them.

Immigrants coming into the country tend to provide labor at the extremes of these criteria. The majority of immigrants work in occupations that don’t require high skill and significant education. There are some immigrants, however, that come to the U.S. because they bring precisely those things. These immigrants are highly sought after because of their particular skills and abilities and usually fall under the H-1B visa program. In either case, they are generally filling in labor gaps rather than supplanting native-born workers.

Similarly, fear of large portions of the immigrant population committing violent crimes is also misplaced. President Donald Trump wasn’t the first to express the view that there was a significant criminal element present within the immigrant population, however, his continued efforts to enact greater restrictions on both legal and illegal immigration have been largely justified with such comments. The tragic death of University of Iowa student Mollie Tibbits by an undocumented immigrant has only added fuel to this fire.

Once again, perception differs significantly from reality. The majority of studies on the correlation between immigration and crime conclude that immigrants not only do not increase crime, but that they tend to commit crime at lower rates than native-born citizens. Studies such as this one, this one and this one also demonstrate the lack of connection between immigration and criminality

It is important to remember, the primary reasons people attempt to migrate to the United States is to escape horrible conditions in their home countries. Conditions such as war, violence, government oppression and limited job or education opportunities are what lead individuals and families to move to a completely new country and culture. Rather than being criminal or violent, they seek to escape those things.

Focusing on the exception (immigrant crime) while ignoring the rule is not a basis for good public policy. The vast majority of immigrants wish to live here peaceably while making a better life for their families. By and large, that’s exactly what they do.

A final concern I often here from some who are opposed to more immigration is that immigrants come to the United States to gain access to welfare benefits and thus contribute to our growing national debt. This concern generally reflects a lack of understanding of the restrictions placed on immigrants in regard to receiving welfare benefits.

In 1996, Congress passed sweeping welfare reforms. These included significant restrictions placed on the ability of immigrants to obtain public assistance. Temporary migrant workers and illegal immigrants are generally banned from receiving public assistance. In addition, legal permanent residents must wait at least five years before becoming eligible to receive assistance. Only naturalized citizens, along with refugees and those granted asylum, are eligible for any of the federally provided means-tested benefits.

So, why do these perceptions persist? One reason is that when an immigrant does commit a crime, get a job or receive assistance, it stands out more. Think of it this way: When was the last time a news story covered a crime committed by a native-born citizen and included a comment such as, “The perpetrator was a ‘natural born’ citizen of the United States”? But it happens almost every time an immigrant is involved in a crime.

Allowing more people in seems to be the right answer

Whether one looks at the immigration issue through the lens of the Declaration of Independence, the religious tradition as found in the New Testament or through economic analysis, allowing more people to join our American experiment seems to be the right answer. Attempts to restrict immigration are, more often than not, born out of an irrational fear that those who are here will lose something by allowing others into the country.

The history of our country, however, both recent and distant, reveals the opposite. We are enriched by the talents, abilities and work ethic of immigrants. They add to a rich and diverse culture while at the same time becoming thoroughly “American.” More than many who are born here, immigrants appreciate the freedom and opportunity available in the U.S. and work to take advantage of it.

In this series, I’ve tried to explain the three factors that have most influenced my changing perspective on immigration. I hope, even if you disagree, that I’ve offered something worth considering. Increasingly, discussions regarding issues such as this devolve into name calling and questioning each other’s motives. I’ve tried to avoid that and simply provide an insight into what has influenced this gradual – but real – shift in my thinking on this topic.

I know many who read this will disagree with my perspective. I hope you’ll take the series in the spirit it is intended: to foster genuine dialogue over what has become a very contentious issue in our country, and to do so absent the vitriol and accusations so often found in such discussions.

For those who might have been persuaded (or who at least found this series as reinforcing what you already believed about this issue), I hope you too will take it in the same spirit. It’s hard to convince others when you are punching them in the nose. Finding points of connection with others and focusing on those will be more persuasive in the end than shouting insults. 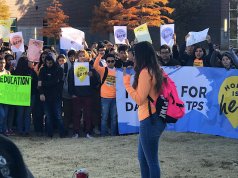